We sit down with Mair Morel, the person in charge of coordinating the UK’s biggest Festival X Theatre extravaganza. Boomtown takes place from August 7th – 10th this year and it quite unlike any other festival you’ve been to. Mair tells us why…

Working for Boomtown is the DREAM job! How long have you been part of the team and how did you reach your position?

I have been here from the beginning! My role grew with the festival. I started as a walkabout performer, then programmer, then to producing my own theatrical elements of the show which included “The high life” high wire show and finally to Creative Producer where I oversee it all!

I absolutely love what I do. To work on planning and implementing a show of this scale and ambition, which inspires moments of pure joy in people, is like nothing else! We are a passionate bunch who want to outdo ourselves year on year. That kind of benchmark is a tough one to set but it’s so satisfying to be a part of delivering a show as jaw dropping, exhilarating and inspiring as Boomtown! It’s a collective effort, the team are the most caring, capable and forward-thinking people I have had the pleasure of working with.

It sounds incredible! What’s your favourite part of your role?

My favourite part is seeing the show live! I hope a show like Boomtown can blow the audiences socks off whilst also introducing them to a beautiful community of like minded people who all want the best for each other and our world.

How would you describe Boomtown Fair to this year’s first-timers?

Boomtown is quite simply – out of this world! It’s a multi sensory weekend adventure that takes you on a journey of music and theatre. No one person’s experience will ever be the same as another’s!

What makes it different to all the other festivals on the circuit (and there’s some serious competition these days!)

Boomtown is unique and in many ways incomparable to other festivals because of the way we combine music and theatre. It’s an immersive experience and the public can come and choose to listen to an immense and varied musical lineup that ranges from international headliners to fresh grassroot talent. A line up that at last count is made up of over 1,000 artists from over 80 musical genres! There is always something for everyone. Or, alternatively, they can immerse themselves in the city and the Boomtown story which evolves year on year.

Tell us more about the story!

The story is interactive and the public are actively invited to engage with it and the hundreds of characters that roam the streets and take part in the interactive game that’s called the “The Immersive Maze”. It allows you to become your own character in the city and take part in a role play for a full four days, unlocking many secrets and plot twists that take you deeper into the narrative. In some ways it’s the narrative that leads the creative direction of the festival and everything that is built is designed to help push the story further and I am always taken aback by the sheer scale of the production, the film like sets and how it keeps on pushing boundaries! 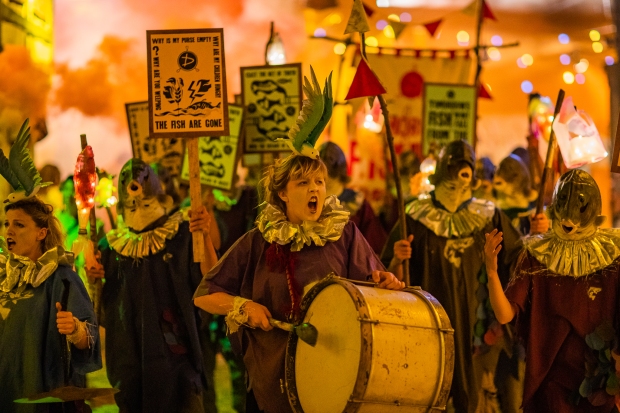 What has been the biggest challenge for you and the team this year?

Boomtown has grown at such an exponential rate and each year brings its own challenges! Moving into a new volume of the story (having wrapped up 10 years of the Nicholas Boom Saga) and how we were going to push our environmental messaging through the story was the challenge this year but I think we’ve nailed it. The level of detail and thought put into each performance, whether it’s a one on one interaction with a character or watching some of the bigger spectacles shows, it’s all there. I’m sure it will blow everyone away this year!

Which bands of this year’s line up are you most looking forward to catching?

Wow, there’s so much happening that’s a tough question! Musically, of the bigger live acts, it’s got to be Lauryn Hill & Salt ‘n’ Pepa; they were my idols when I was younger! Eva Lazarus will be a highlight along with Little Simz, Kelvin 373 & the Born on Road crew. Shy FX’s sets at Boomtown are always legendary too! The theatrical highlights are also something to make sure you catch, especially the spectacle show on the Nucleus stage! The stage will come alive with performers and seriously integrated tech … it should blow the audience away!

Are there any “must visit” stages or venues in the festival, or particular shows to look out for over the weekend?

Get involved in the story! If you want to start playing it’s already begun! Look at the unofficial “Boomtown Storyline Quest” group on Facebook for hints and tips to start playing now. Or once on site knock on those doors, interact with the characters, get silly and lose yourself in the crazy world of Boomtown! The main gameplay happens 1pm – 7pm each day so there’s plenty of time to get involved before you get into the hard dancing in the evenings. It’s the same for the music.

There are so many artists performing. Check out your favourites but explore the districts and discover someone or something new on the way around!

There was an error retrieving images from Instagram. An attempt will be remade in a few minutes.